The Perfect Line - A New Musical 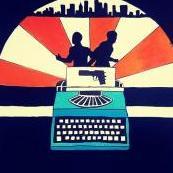 By Broadway Baby,
July 16, 2018 in Orchestral and Large Ensemble