Voyager I Leaving The Heliosphere (Flute and Piano) 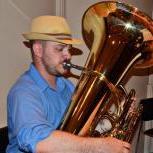 By JordanRoberts
January 9, 2020 in Chamber Music