Symphony No. 1 in F Major 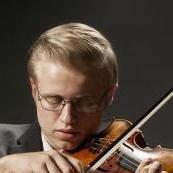 By Sean Brown,
October 7, 2016 in Orchestral and Large Ensemble