The Fox & the Rabbit - A Story for Narrator and String Orchestra 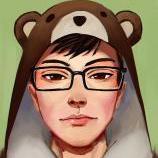 By SebastianViola,
March 17, 2017 in Orchestral and Large Ensemble